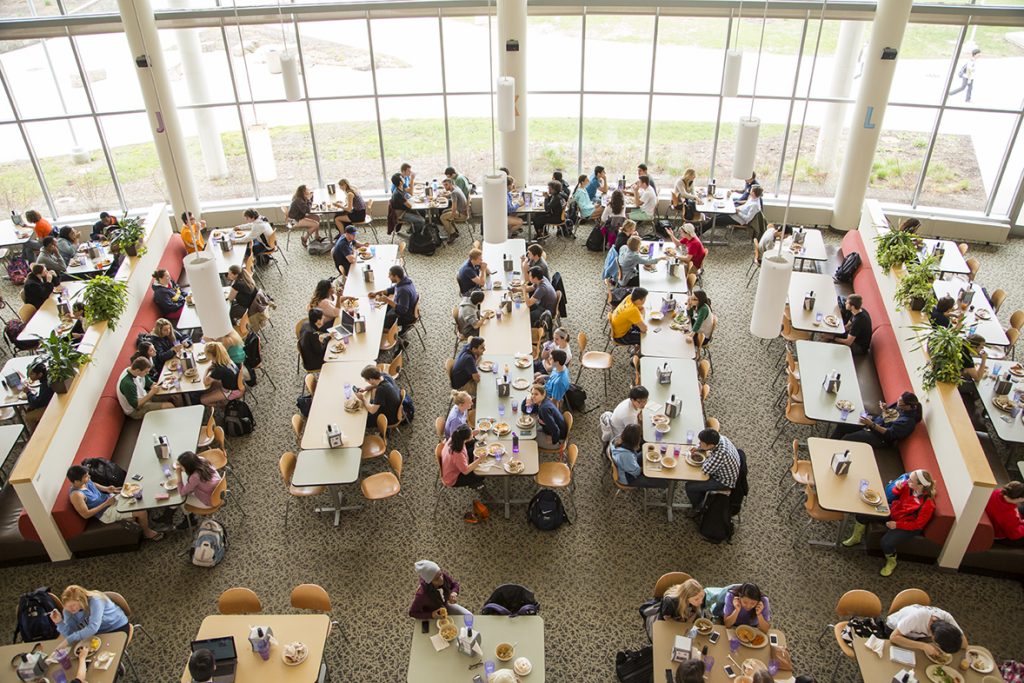 Research conducted by University of Illinois at Urbana-Champaign scientists from two departments within the College of Agricultural, Consumer, and Environmental Sciences (ACES) demonstrates that the simple act of changing plate size and shape can have a significant impact on food waste in university dining halls.

In an article published in May 2021 in the journal Resources, Conservation & Recycling, authors Rachel Richardson [former graduate student in the Department of Agricultural and Consumer Economics (ACE)], Melissa Pflugh Prescott (assistant professor in the Department of Food Science and Human Nutrition), and Brenna Ellison (associate professor in the associate professor in ACE) describe data collected at two dining halls on the Illinois campus in the Fall of 2018. The researchers and dining hall staff monitored and limited the dishware available for patron use.  The only intervention in this study was a change in plate size and shape. Traditionally, the university dining facilities used round plates (9″x9”). In this study, the round plates were replaced with oval platters (9.75″x7.75″), decreasing the plate’s surface area by 6.76%. Both the round and oval plates were tested at each dining hall, and the menu offered was the same for both plate types.

After diners selected their food, but before they sat down at a table, researchers approached them and asked permission to take a picture of their plates and to weigh the plate of food. Participation was incentivized with an entry in a later drawing for a $50 Amazon gift card. Participating diners additionally filled out a survey, and when their plates were brought to the dish return, the researchers took a post-consumption picture and weight measurement. The survey included a question about whether diners went back for seconds; in that circumstance, a post-consumption weight was not recorded.

A total of 1825 observations were collected with 1285 observations retained for analysis. Observations were excluded if the participant: only selected food using non-standard dishware (e.g., only eating a bowl of soup); submitted an incomplete survey; was missing a pre- or post-consumption photo; did not return their plate; or returned plates with different food on them than selected.

Overall, food waste went down from 15.8% of food selected for round plates to 11.8% for oval plates. This amounts to nearly 20 grams (0.7 oz) less food waste per plate. In a setting where thousands of meals are served, this seemingly small reduction could quickly add up. The researchers concluded that changing plate type is a viable strategy to reduce food waste, though dining hall managers need to weigh the cost of purchasing new plates against the potential savings. They speculate that combining the direct-nudge approach of smaller plates with an education campaign could be even more effective.